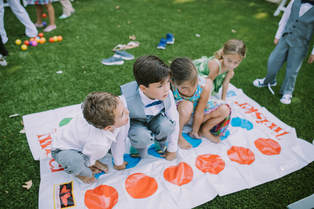 One of the biggest concerns brides/grooms have today, is whether to have kids at their wedding or not.  Most brides/grooms opt to have an "adults only" wedding, so that they don't have to worry.  Even though this sounds like the easy way to not have littles running around, messing up the first dance or even getting in the way of your perfect cake cutting photo... finding childcare can put a lot of stress on your guests.   Many, especially out of town guests, are more likely to attend when their children can be near and well cared for.

By having Black Tie Kids as your wedding childcare service, you along with your guests will be put at ease.  We come fully equipped with crafts, games, activities and a movie (as long as their is a TV provided).  We assist campers with their meal, going to the bathroom, getting a hold of their parent/guardian if necessary, etc.

At Black Tie Kids, we believe that while it is great to have flower girls, ring bearers, and pictures with the children in your life on your special day... a wedding (especially the reception)is really not the place for kids.

Please note that we are not your average babysitter. We do not babysit for the same family on a day to day basis, and are used to dealing with children being in an unfamiliar environment and potentially having a tough time separating from their parents.  Our cell phones are kept away, unless for business purposes.

About Our Founder - Mollie Yarsike

Growing up, Mollie babysat for several different families throughout the Metro Detroit area and continued to keep up relationships even as she went to college in New York City.

In New York City, Mollie nannied for two different families with kids ranging from four months old to eight years old.  After graduating from The Fashion Institute of Technology, with a degree in Advertising and Marketing Communications and a minor in Economics, Mollie decided to move to Los Angeles for warmer weather and the atmosphere she always wanted to live in.

Once moving to Los Angeles in 2015, Mollie began attending different networking events for young professionals.  It was at one of these events, that prompted the start of Black Tie Kids. "I was at a networking event in which a couple hosted a ton of young professionals to mix and mingle for dinner. The couple had three kids (ages 7, 6 and 4). The two older kids were totally fine that night.  They joked around with each other, ate their meal and kind of knew what to expect from a night like this. The four year old on the other hand was pretty sad.  She needed attention and her parents were both busy hosting.  Her siblings were old enough to keep themselves occupied, so she was essentially alone.  I saw her upset and my nanny/babysitting instincts kicked in. We played games and talked.  It was when I went home that I realized that there needed to be something so that kids could still feel special during an adult focused event.  It was then that the idea of Black Tie Kids came to be. In 2017, Black Tie Pups started as a way to help couples who want to include their furry friend as a part of their wedding day.